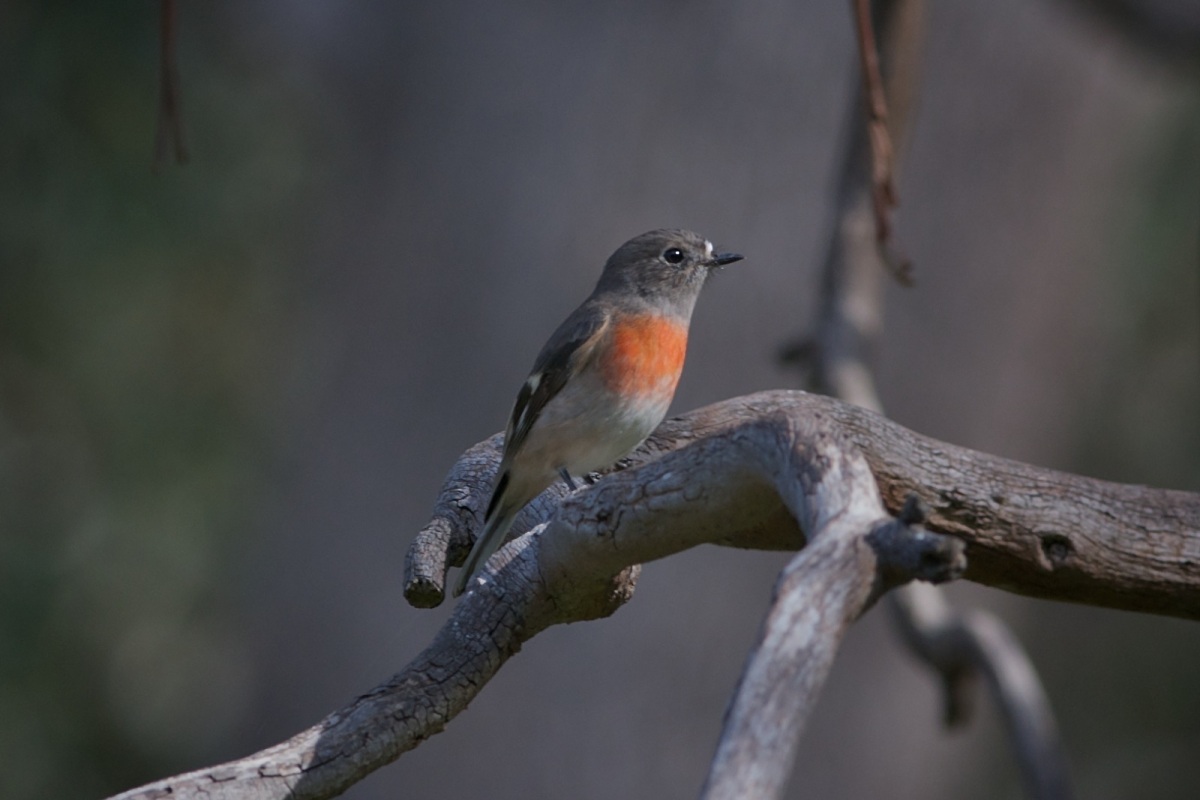 Andrew and I had planned a morning out to scout about a bit. See Andrew’s Blog here.
The weather stayed kind, but for the first half hour or so, not a wingfeather was seen. We walked down along the ridge in the Backpaddock and again it was all very quiet, until we found a Red-capped Robin and then his lady, and probably a couple of juveniles.  He has moulted out, and seemed quite pleased with himself and took the time to hum his little “deritt” song.

The girls had stopped down by the three road crossway, and were having their own great morning with a pair of redcaps, a Flame Robin female, and a couple of Flame Robin juveniles.  Isn’t that always the way.
Andrew and I got back to find all the activity happening right where we had turned off the track.

The female Flame Robin looked in great shape. Very plump and sleek. So she hadn’t travelled far to get there. No pictures as I was driving the binoculars at the time and the camera wasn’t in reach. Don’t you just get that.

We walked, quite pleased with our collective selves, to the dam, and on the way a familiar red flash dashed across the track. Scarlet Robin.  But then another wing flash, and it was not the Scarlet Robin’s Red-capped consort, but a real live female Scarlet Robin.  Then a second one.  Most interesting and rewarding. All were quiet, as they usually are.  So I am not sure if they are all new arrivals, or two females only.  The male and one female played lots of high speed pursuits about the trees.

On to the dam and a number of Grey-shrike Thrushes were bathing and then they too joined in tree chase games.  And to make a great morning even better, Dorothy spotted a yellow flash in the tree, all excited we were, but it wasn’t a Robin, but one of two Eastern Shrike-tits, doing what they do best; eating grubs.

While we were congratulating ourselves on our good fortune, Rodger, he of the red-spot camera site fame turned up, and added to our morning’s wander.

The next few days should prove to be very interesting.

We all got back to the car in time for lunch, so a good end to what started out quietly.

3 thoughts on “Welcome Return. Flame Robins and Scarlet Robins in the forest”