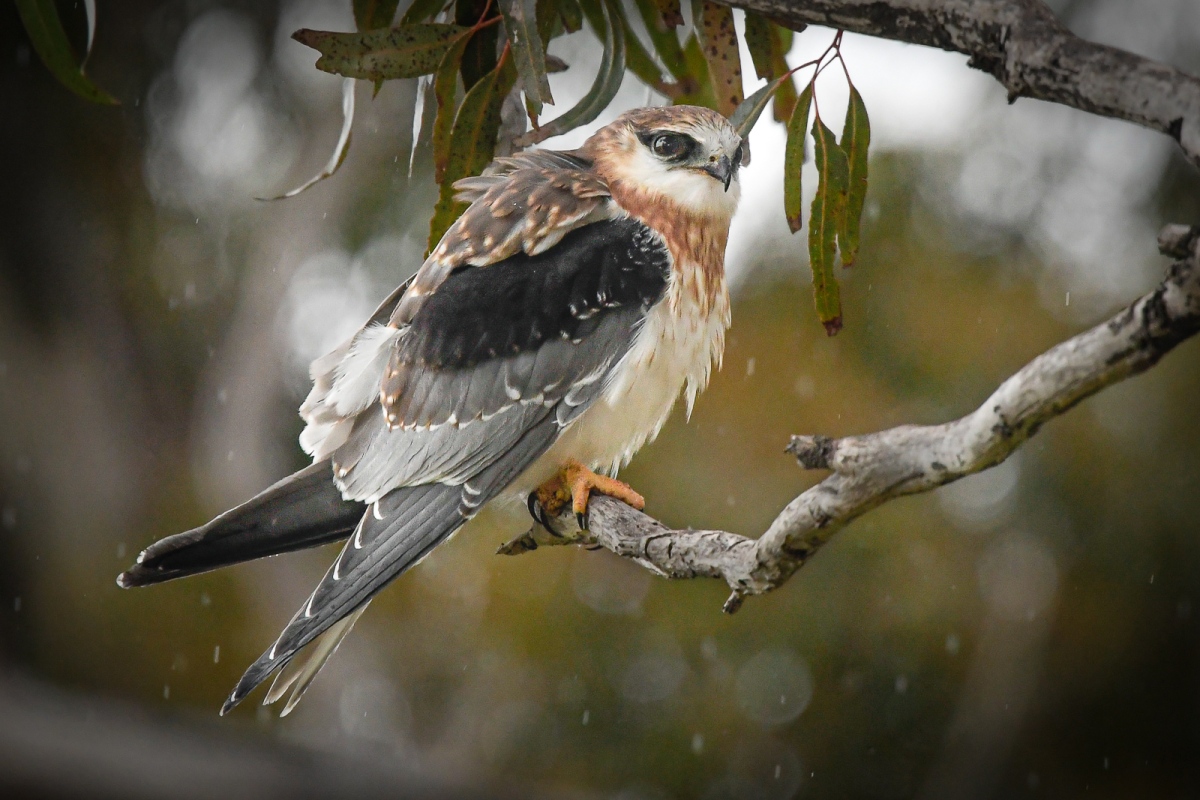 For once the weather tv talking heads had managed to get it right.

EE and I had an appointment at the medical precinct very close to the nesting site of the Black-shouldered Kites. How close? Well, we could see the trees just down the road as we parked at the clinic.

“You know,” she had said, “we’ll be in the area, why not just take a few minutes after we’re through with the doctor, and go on for a look to see what the young kites might be up to?”

But, as they say, by the time we’d finished with the medicos and were back in iAmGrey, the weather had closed. In!

Still a quick look wouldn’t hurt would it.

The showers had turned to a light drizzle, and we rugged up, grabbed the cameras and walked down to the nesting area.  The young kites were up and about on some trees nearby.

A glance across the paddock behind them revealed a slow moving grey mass, that was more than ‘just a passing shower’.

In the open paddock it was intriguing to see the grey mass, slowly, and, inexorably heading toward us.
The drizzle turned to a half decent shower, and then to incessant and increasing as the grey mass loomed even closer.

Dad, was out hunting, and it was thought prudent to stand under a tree and try to keep the cameras dry, and hope that he could bring in a mouse for a bit of aerial action.
One of the young kites sat, ready to make its presence felt should a food offering be made.
But

The rain was now intensifying, and after a few shakes of the feathers, it must have concluded that it would be drier under the trees. It took off.

Headed in my direction, and landed on a branch about 5-6 metres from where I stood.  We both looked at each other.
I offered it a, “It is getting wetter isn’t it” But the young one just shook its feathers and tried to hunch down a bit to avoid the rain that was now coming through the tree canopy.

“Time to head for the shelter of the car….”, I heard in the distance, as a bedraggled EE set off toward the vehicle.
I stepped back just enough to fit all the of the young bird in the frame, messed with the exposure, and made the shot.

The young kite had second thoughts about this being a dry spot, shook its feathers again, and flew across the stand of trees to what must have been a much drier area. Perhaps it thought if I wasn’t going to share the space with it, it would go elsewhere.

Smiling, I slogged back to the car.