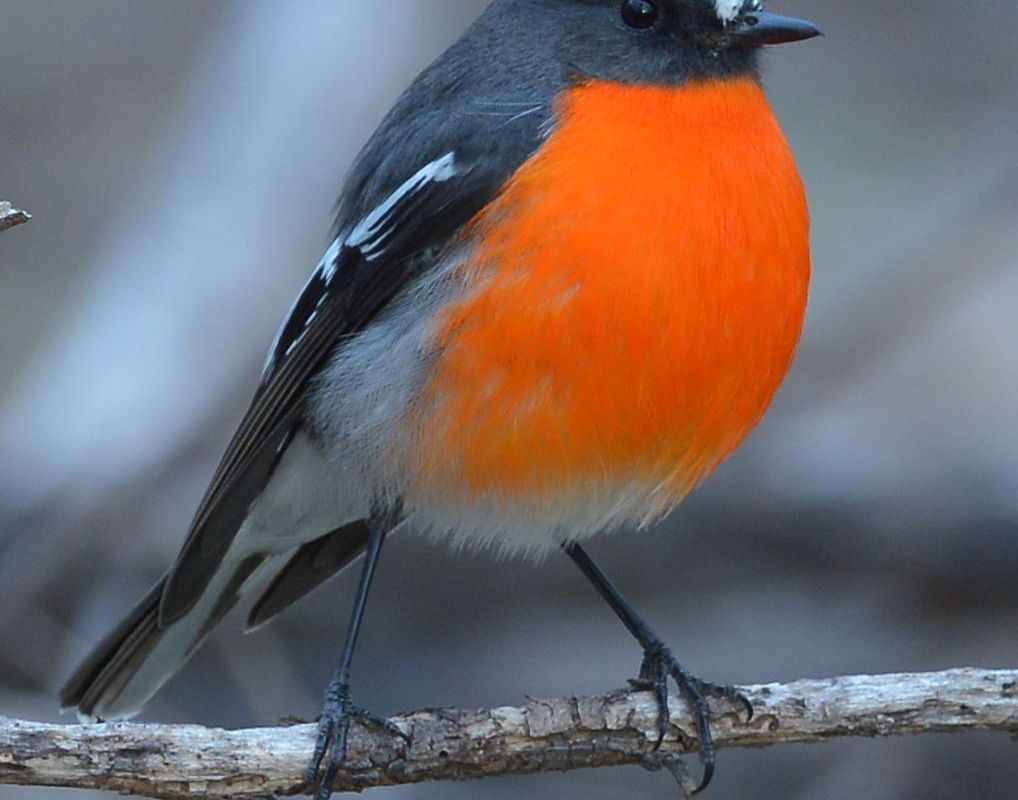 Dorothy was away for the Mother’s Day weekend with one of our girls, so I was left to fend for myself down in the back paddock.

I decided to take a walk over the ridge with the pipeline attached, (because of security reasons that exact location of the pipeline is only know to those in the know, but the signs every 30 metres announcing that a pipeline is underneath,—  and those reading the signs are not meant to meddle with the pipe., Which is fine because it anticipates that anyone wanting to meddle with the pipe, can’t read?–  I’ve always thought was a dead giveaway about where the pipe might be.  But, think about it the signs may only be part of the clever ploy to confuse those who can’t read? )

But I’d barely got on to the ‘roo track up the ridge, when I ran into my first hunting party of Flame Robins.  A family of about 5 birds. They’ve been in the area near the 3 Way junction for most of the week. After a few polite photos, I moved on to the top of the ridge. The weather was indicating rain, and the wind was very strong, so I figured perhaps the Kites and Eagles might be playing in the up-draughts off the hill, but. No.

There is a dry creek bed between the hill with the pipe signs and the rather conspicuous radar town on Gellibrand Hill.  But it does keep a little more moisture than the surrounding rises, so there is a good chance of a bit of bird activity in there. The first thing I spot is a lone little rock wallaby. Now I’ve remonstrated before on the plight of said wallaby, and the fence that runs through its territory.  I just wonder now, if its the only wallaby on this side of the fence. And that worries me, as a single wallaby in an environmental park is pretty much redundant before it starts.

Not to far on I came across a hunting party of Flame Robins,  (total for the day 9 birds),  They were a new group for me, and included a pair of Scarlet Robins, (total now 11).

Onwards down the creek line and my attention was drawn to a lot of noise, and activity among a stand of lovely grey box.  There were two pairs of Red-caps hard at work, more willie wagtails than I can count, and a large flock of Yellow-rumped Thornbills, and some rather noisy Grey Fantails, and a third hunting party of Flames,  4 males, about as many females, and a handful of juveniles,  Flame total now 18+.  Again these were all new birds for me, and one of them was especially well marked with a yellow sash on each side of its chest.

Across the road near the police paddocks, and down by the dam, and another small Flame party in high speed mode.  Total now, 23+

Right down at the south end of the backpaddock is a stand of sheoaks, and a wide open area of grassland. Ideal for bandicoots, and also a major lair for foxes. (Of which of course now due to the many eradication attempts now don’t exist. Except don’t tell the fox(es))

But near the grassland is a nice run of Grey box and black wattle, and here I ran into another small hunting party of Flames and a second pair of Scarlet Robins,  Total now 27+ and 4 Scarlets.

The area down there is good greybox, and the few kangaroos use parts of it as a lay over, there is also because of that a lot of small ground cover saltbush, and it has a particular tiny red berry.  Again I’ve postulated my theory on the use of the red berries by the Robins, but it seemed strange today that all the hunting parties were in areas where the saltbush is in fruit.

I followed the grass lands back toward the north, and just as I crossed the east west track, another family of Flame Robins appeared.  The distinctive markings on one of the males, identifies them as some that were in the park in the early part of April, so total now 33+ Robins.

Henny and Penny came by to see what all the fuss was about, and Henny gave the males a piece of his mind, which when your only 12 gms can’t be very much.

As I walked back along the track near the powerlines down to the dam, a familiar tic tic greeted me, and not more than about 3 meters away was a male redcap, he tic’ed, I tic’ed, and I am half of a mind to conclude its the missing Locky.  He has a cute little white mark on near his beak.  More to tell I suspect.

I followed the grassslands back north, and saw little else, but the

2 thoughts on “A long walk, in the Long Backpaddock”