We stopped briefly this morning at the Black-shouldered Kite nest in a pine on a now disused piece of road.

The last few times we’ve visited it was apparent that the young birds were getting close to fledging, however as it turns out we were pretty much completely wrong.

When we arrived they were already sitting high up on the tree and one moved from one branch to another with a skill of a seasoned flyer.
And not long after two of them took to the air and circled about the paddock around the tree, eventually returned and settled in.
A third one came by just as we were leaving so it must have been resting in a tree further down the road.

On return the young kite had to run the gauntlet with an enraged Australian Magpie. Unfortunately it happened all so fast and so close in that we didn’t get much of a result, and to it credit the young kite was easily able to avoid the attack. Which further shows they have been airborne a few days at least.

The female turned up and spent quite a bit of time ‘tail flicking’, which I’ve always taken as either a pair-bonding  or a territory maintenance movement. Given a second pair of Kites have a nest somewhere further down the main road, it might be safe to assume she was giving warning that her young were out and about and not to be messed with.

Here are a few from the excursions around the nest.

Young Kite defending against the Magpie attack. The feathers might look out of control, but I suspect it has set up the feathers to give it both control and the ability to avoid the magpie. A good indication they have been out for a few days.

We have finally been able to break out of our 5km border restrictions.
Not big mind you, we only needed about 7km to get to The Office.
Along the River Park walking track the bush is alive, as they say to the sounds of parrots, lorikeets and smaller bush birds, including Wagtails, all busy either defending a nesting location or challenging for better accommodation.

None, it seems, more so, than the large number of Rainbow Lorikeets that have descended on the park area.  Over the years their numbers have grown to what can only be plague proportions.  Each hollow in every tree seems to be a Rainbow chosen location, much of course to the chagrin and detriment of the smaller birds that simply can’t compete with the noisy, brash and boisterous Rainbows.

But they do have some advantages for the photographer, besides their brilliant colour scheme.

As EE commented as we walked down the track with the calls of the Rainbows ringing through the trees, “They are  bit like a single bird circus, each one has its own act.” Perhaps its partly bravado, partly the need to show-off to their peers and partly to intimidate other species.  But there is no doubt that a pair can provide hours of entertainment, as they talk, preen and dance together.

We were a bit late for the opening of this bird’s performance.
Two options I think:

It had been holding on to the bark on the branch and it had given way under the weight and it had desperately grasped the bark above with its beak,

It was using the bark and the balancing act to impress its mate.

Either way, as it waved the bark about with its foot, was it trying to gain balance or simply attention.

Easily able to support its weight by the beak, it didn’t seem to be in any hurry to recover and rolled around for quite a long time.  In the end, dropping the bark, it did a ‘chin up’ grasped the bark near its beak with first one, then both legs and swung up onto the branch.

Hard to say, but the crowd threw popcorn and cheered at the performance. 🙂

You can tell we’ve been locked up too long when such simple things form such great amusement.

I’ve often commented on Flickr and Facebook and other online groups, and of course here on the blog that I consider the Australian Hobby to be our most beautifully marked raptor.

It’s steel-blue-grey wing and back contrasts with the rich  chest and underwing colours and the light and dark underwing patterns all make for an impressive show.

David Hollands writes, in “Eagles, Hawks and Falcons of Australia“, in his chapter on Australian Hobby

If there is a jewel among Australian hawks,  it is the hobby. Smaller than the Peregrine, it  is lithe and slim and incredibly fast. At rest, sleek and polished with a silhouette that tapers rapidly from its slim shoulders, it has the look of pent-up brilliance waiting only for the trigger to transform potential into action. In flight the promise becomes reality, it seems hardly to have left its perch before it is travelling at dazzling speed. The wings are long, narrow and swept back in a sickle-shaped curve that is particularly noticeable when gliding. … Of all the falcons I know it is the most graceful and there are few more exhilarating sights than one that is stooping, wings curved back, eyes fixed on its target: everything taut and totally controlled:wavering not one fraction from its course and travelling at remarkable speeds for its size. (p.156)

Somehow I suspect that most of us never get to see the bird at much more than a distance, or at high-speed in a high wind, or perhaps sitting on a open perch or fence post.

But to appreciate this bold little bird requires a lot of time working with just one bird or pair, and due to their rather nomadic and social isolation, it is not often we get the chance.
I have featured a pair at nest at the Werribee River Park precinct a couple of years now on the Flickr and here on the blog.  We have had at least three previous seasons with them, and were highly anticipating getting out of our 5 km bubble to see if they had returned for another year.
And.
They have!

We have the good fortune of being only a 15 minute and 5 minute walk from their nesting area.   So it’s possible to arrive early and watch the comings and goings of both the tiercel (male) and falcon (female) and learn a little about their ability in the air.

The nest is being reused and is high in a sugargum, the multi-branching of the tree has produced substantial eight to ten branches that form a ‘cup’ and the previous owners had filled it with sticks, and as Hobbies don’t build but rather reuse, its probable that they have not refurbished the nest since its last use.

The nearby Werribee River run between some quite steep, and high sand ‘cliffs’ and Fairy Martins and Welcome Swallows among others use the area over the water to hunt for food.  It makes an easy food source for the tiercel, he sits on a branch overlooking the water, and when opportunity presents itself, with barely a feather flick he is airborne off the branch down into the river area and because the cliffs on either side give the target little hope of avoidance, is usually back up out the other side of the river in his first swoop. If he misses, I’ve not seen it happen yet.
Which brings me to another point that David points out about it travelling at both incredible speed and with unwavering trajectory.
It is hard to put to words, but on return he flies far out and then on a perfectly designed and executed arc, circles back to land without making any adjustment to his travel that I can detect. It is like a beautiful Tai Chi move.  Smooth, controlled and effortless. (In Tai Chi, the term, “Sung” would be appropriate)
At first I thought it was just a one off, but each time he came in it was pretty much a carbon-copy of previous returns.
The falcon does the same thing when she leaves the nest and returns. It’s a long arc at speed, and just as she approaches the nest, she throttles back and lands though the tree branches as light as a feather.

It’s early days in the cycle at the moment as they are still mating, but not doubt she is sitting on some eggs as he is quite the busy provider.

It is worth contemplating that over the next two months, he will bring in daily about 12-15 kills. Mostly small birds, from Martins, Swallows, Sparrows, Honeyeaters and the like.  Not so much Mynahs and Starlings. (Although they are quite plentiful). That will be somewhere around 700 dinner invitations that the invitees can’t refuse.

This shot is the tiercel, he has just passed over the food supply to the falcon and is going to take a quick rest in a tree opposite until she has eaten and is ready to return to the nest.

Covid Lockdown Restrictions not withstanding there will be more to see of this pair and their progress with the clutch. 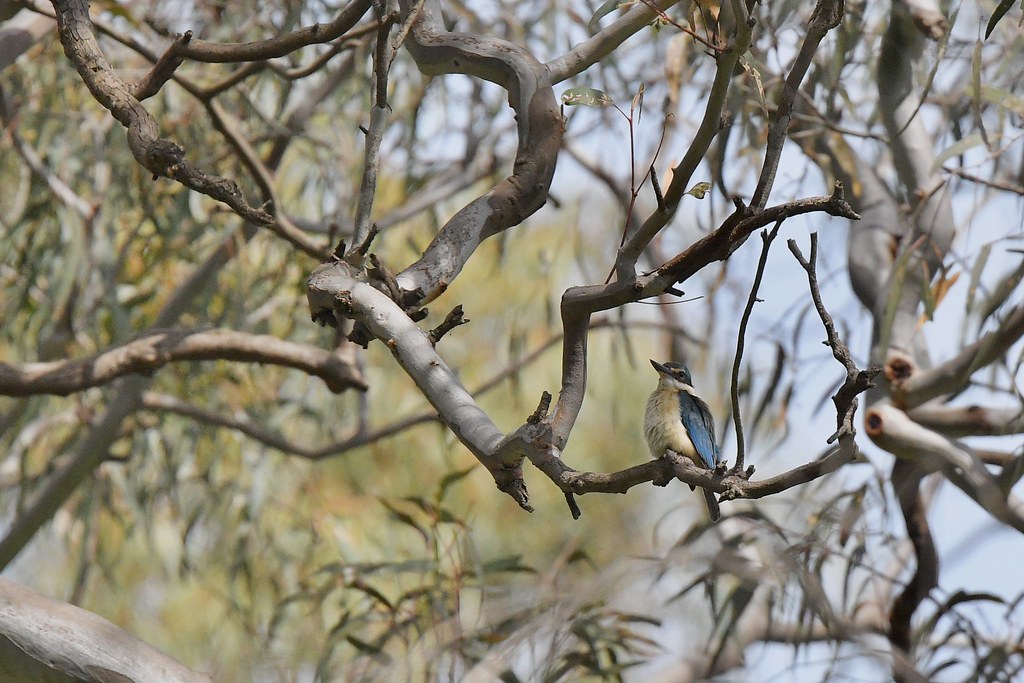 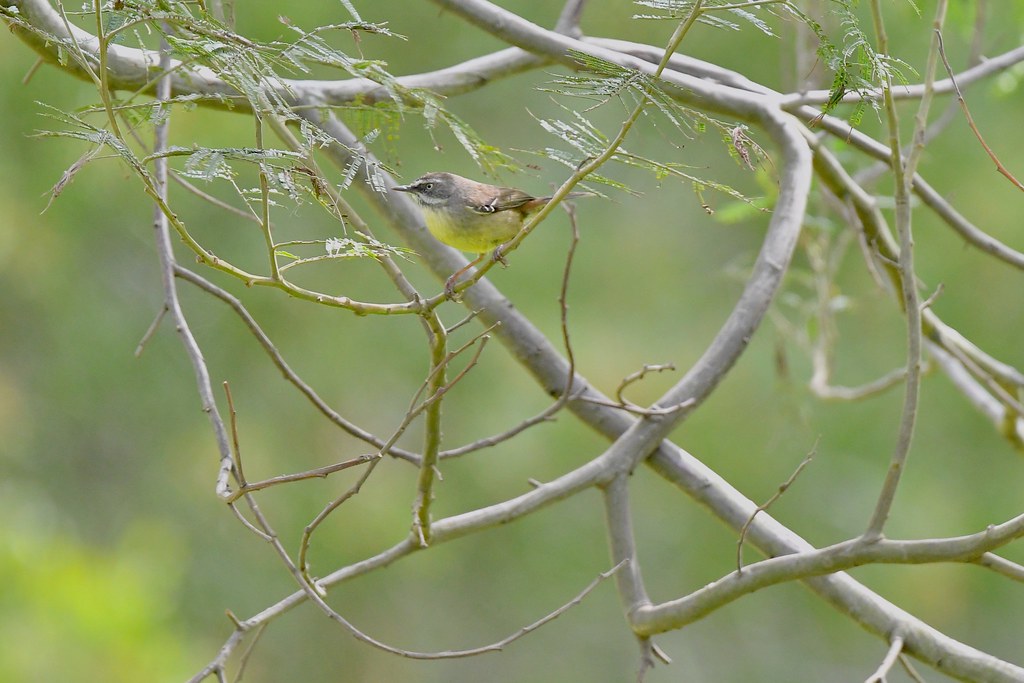