All the usual warnings of images that contain material that may ‘offend’ some viewers, and the plea to be sure to contact the appropriate helpline.

I have, it must be told not ever thought about Falconry as a pasttime.
Not the sport of the rich and regal, but rather the Falconer, and their intimate relationship with these amazing birds of prey.

That such a bird could in fact be domesticated in itself seems hard to grasp.

It is also true that I’ve never spent any more than a few glancing seconds with any of the falcon family (exception being Brown Falcons, but let’s face it, they don’t have the same mystic of the Peregrine or Hobby.)

So, to have a close encounter with a pair of Australian Hobbys (sic—my spelling of the plural) and their resulting young has been quite a thought provoking experience.  Over the past few weeks EE and I, Mr An Onymous, and Neil  A. have clocked up quite a few hours learning a little about their habits, character and approach to life.

In no particular order some bullet points from my field-notes.  I must stress this is not scientific research, and is quite anecdotal-bordering on the anthropomorphic. (Again the usual warnings also apply)

From a bird I have had only the briefest of encounters with, it has given me quite an insight into why they could be trained and how much skill a falconer must have accumulated.

Here is an a couple of days activity before the young were flown.

Click on the Gallery for larger view and slide show. 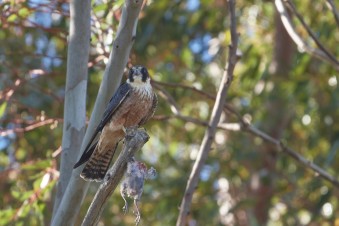 The male, just arrived and after quietly calling he waits for her arrival

And he doesn’t have to wait long. It is such a smooth almost effortless exchange 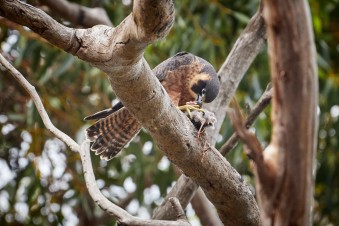 She will feed herself, clean up the carcass and take it to the young. 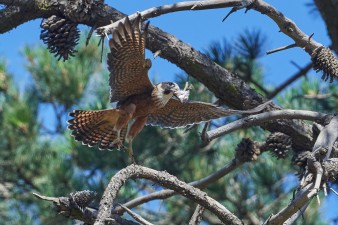 Another meal on the go 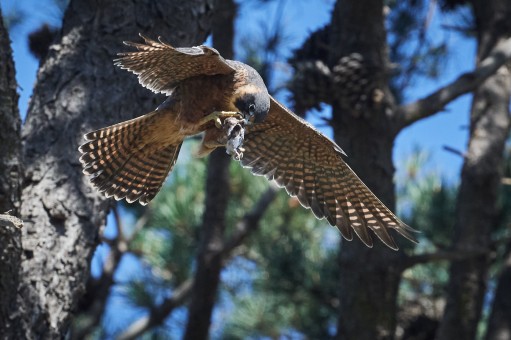 Checking to make sure it is securely attached.

Off to feed the young

11 thoughts on “A Fascinating Hobby”