Normally I don’t do book reviews, nor equipment boosts and the like.  I also have refrained on this blog from entering into discussion on Politics, Religion or Sport.  Except of course for the occasional swipe at these hot potatoes.

So what is a book doing here?  Hardly birds.
And right you are.

However Obama an Intimate Portrait is by a photographer.  Pete Souza by name.  Not one the average birdo will have heard of, but stay with me on this and we’ll see where it goes.

First I’m not asking, suggesting or hinting you go out and buy this book.  Its big, bold and expensive.  Interlibrary loan is a good option. Worked for me.

I first found out about Pete’s work from The Online Photographer (TOP) blog.

Mike Johnston has been an editor I’ve followed for many a year, he used to be editor of a magazine called PHOTOtechnique, which used to explore some great photographic processes in the days of film (I refuse to call it analogue or Analogue).

Anyway here is Mike on the book,

And a link to Pete Souza’s site about the book.

For those who enjoy people photography there is so much to like about the book, and dare I say it out loud, but also to gain an understanding of the man at the center of the photos. Obama.
Pete spent most days, and many hours of the day with the President.  He collected over 2 million images.
And it began to dawn on this old brain, that had I not pursued my photographic path,  I might have enjoyed being able to photograph, not as a paparazzi, but working with people to make compelling intimate portraits.

There is the connection.

Much of what I either show here or on Flickr or place as wall art, or calendar or book work, with the wide variety of birds that I have the privilege to work with, is to bring intimate portraits of fascinating moments in their lives.

Now, I’m not comparing to Pete’s work, just pondering the way roads diverge and converge at the most unpredictable times.

Obama writes the foreward to the book, and I’m going to take the journalistic license to quote one small piece.  See if it resonates with your own work, or your interest in birds.

“… what makes Pete such an extraordinary photographer, I think, is something more than his ability to frame an interesting moment. It’s his capacity to capture the mood, the atmosphere, and the meaning of that moment. And for all the unique and often historic images he captured, he never made himself part of the story those images told.”

You’ve probably noted the “No Shape No Shadow” trailer I added to the site. (a Tai Chi thing), I think Pete might have been happy to accept that as his working mantra.

Back to birds next week. Promise. 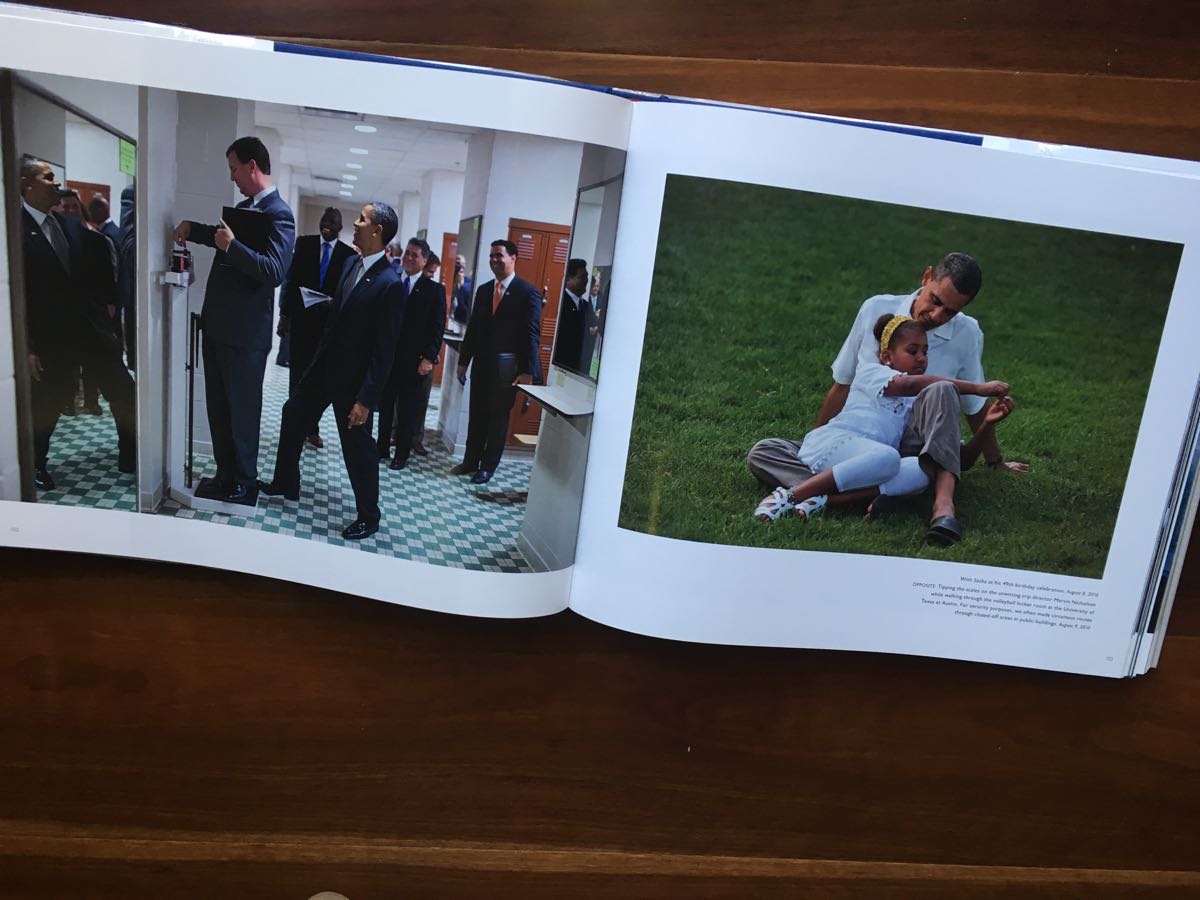 I really liked this spread as it shows the man, “POTUS”, as Pete nicknamed him, putting his foot on a weigh machine for one of his staff, and relaxing as any Dad would like to on the lawn with one of the kids.