My local bird group, BirdLife Werribee, or more affectionately known by the previous name, “Werribee Wagtails” has for many years been doing  bird surveys once a quarter at various sites.
This weekend we surveyed the Mt Rothwell Conservation and Research Centre just to the north of the You Yangs range.
To quote Peter Sellers from “Balham Gateway to the South”,
—It is exciting work and my forefathers have been engaged upon it since 1957—

The previous few days of rain had managed to get past the You Yangs rainshadow and give the area decent drink. As we assembled, we were joined by a group from BirdLife Australia, Ovens and Murray.

And the bush seemed to respond to our enthusiastic banter as we walked over the various tracks that lead through the park.

Counting, of course, is a bit of a hit and miss method, and we arrive at numbers, by what is best termed as an auction.
“Black Kites:  I saw 7”, “I saw 9”, “2”, etc.  Not bad when the bird numbers are small, but now move to one of our favourites and a very well represented bird of the area, Superb Fairywren. (Blue Wrens).  Oh, 35, no more like 76, err I saw 20 by the lower roadway, etc, etc.  In the end we settle for 48. See.  Easy isn’t it.!
Exact numbers not being the test, as its the essentially the same people, the same areas, and the same time of year, so what comes from the data is a range of patterns of growth or decline.
Some birds seem to remain fairly stable, others decline or occasionally increase. And then there are the travelling bird, the yearly migrants.  Such as Dusky Woodswallow and Rainbow Bee-eater.  No doubt many do not stay in the park, but are resting up to move further on in their migration. Such was today with significant numbers of Rainbow Bee-eater well represented in most of the forested areas.

Normally I don’t do to much photographic work in the area, but because of the swelled numbers, I thought I’d be a tad more adventurous and check a few areas off the beaten track.
Here is a sample of my perambulations:-

Sacred Kingfisher had a lot to say in the early morning light.  Not sure if it will stay or laying over between travels.  Just starting to see, or more likely hear them in a number of local spots.

A Black Kite, one of quite a number that we encountered  (see that word count in there!!!).   Did cause a bit of discussion among the group as to whether the light feathers might have been a Whistling Kite. But the cere is the give away.

Then we discovered a pair of Varied Sittella that were engaged in preparing a nest.  Tough light on the nest area did create a bit of a problem for the photographers.

At the end of the day, and the birds all suitably auctioned off, we had seen a total of 54 species for the day.  A great result as indeed numbers don’t normally run that high.

On the way home, EE, Mr An Onymous and I called into look for a pair of Tawny Frogmouth in a small clump of scrub alongside the Werribee River. (I have featured this pair before, last year, as they had a nest quite close to the walking track that EE and I frequent on our daily stroll).  We’d not had much luck finding them recently, but one of our group offered a suggestion, and we were eager to followup.
And there he was, high up and looking very, well, Tawny Frogmouth relaxed.

And for good measure, EE looked about and spied a White-faced Heron on nest.  They don’t call her Eagle Eyed for nothing. 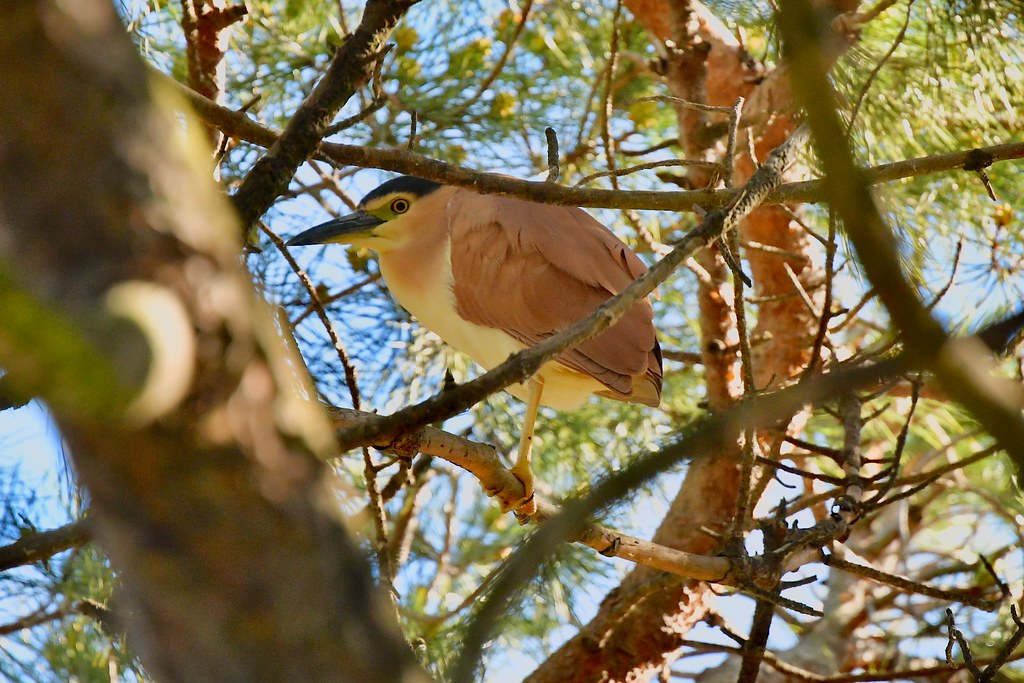 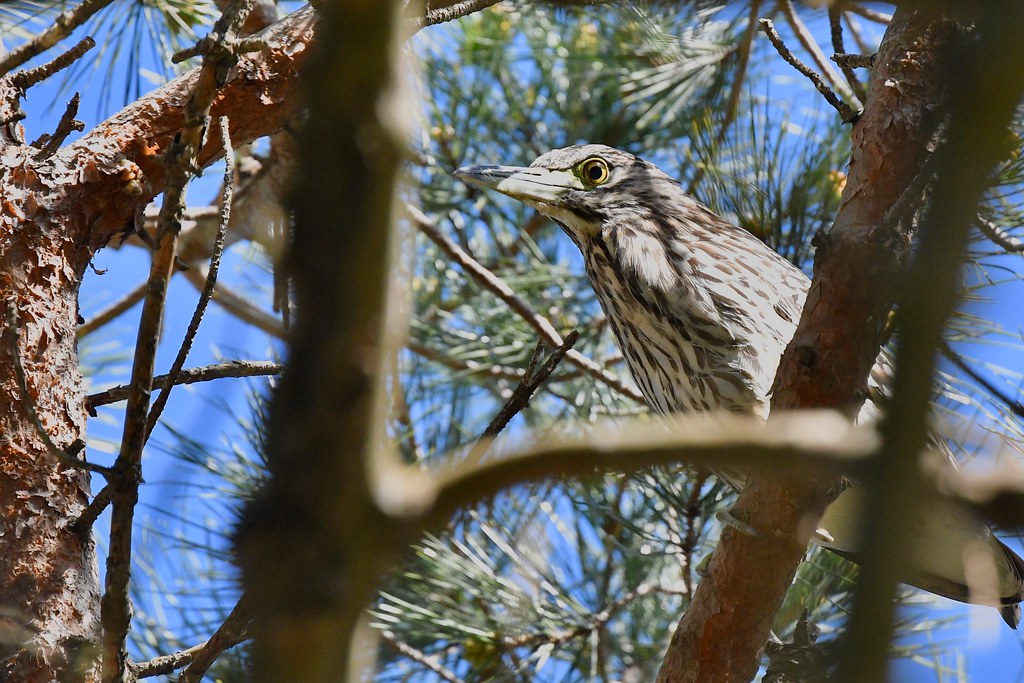 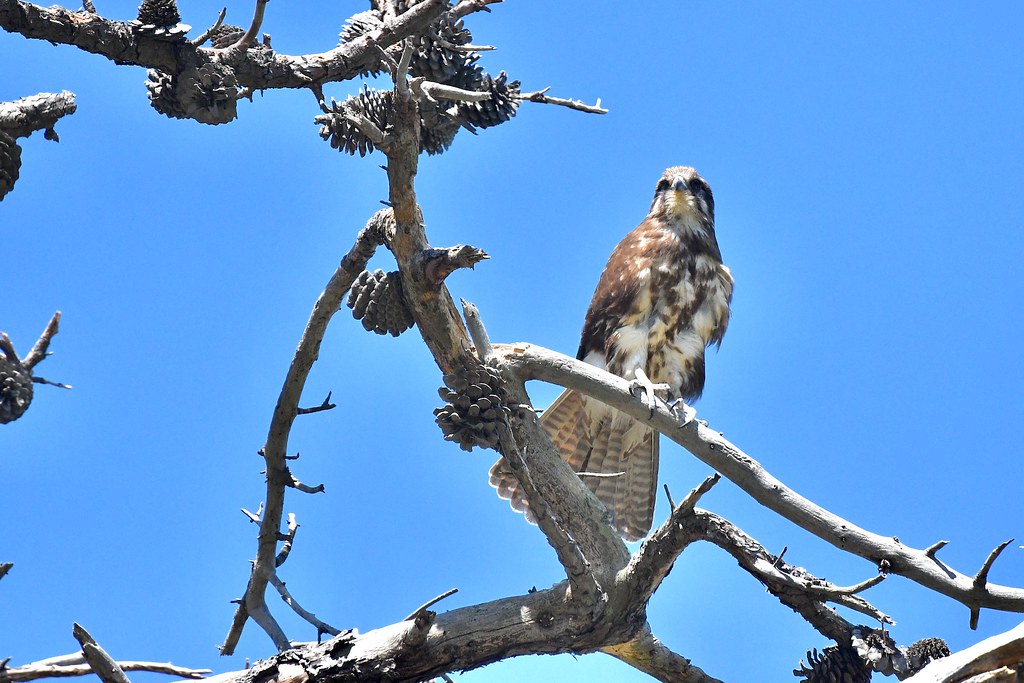 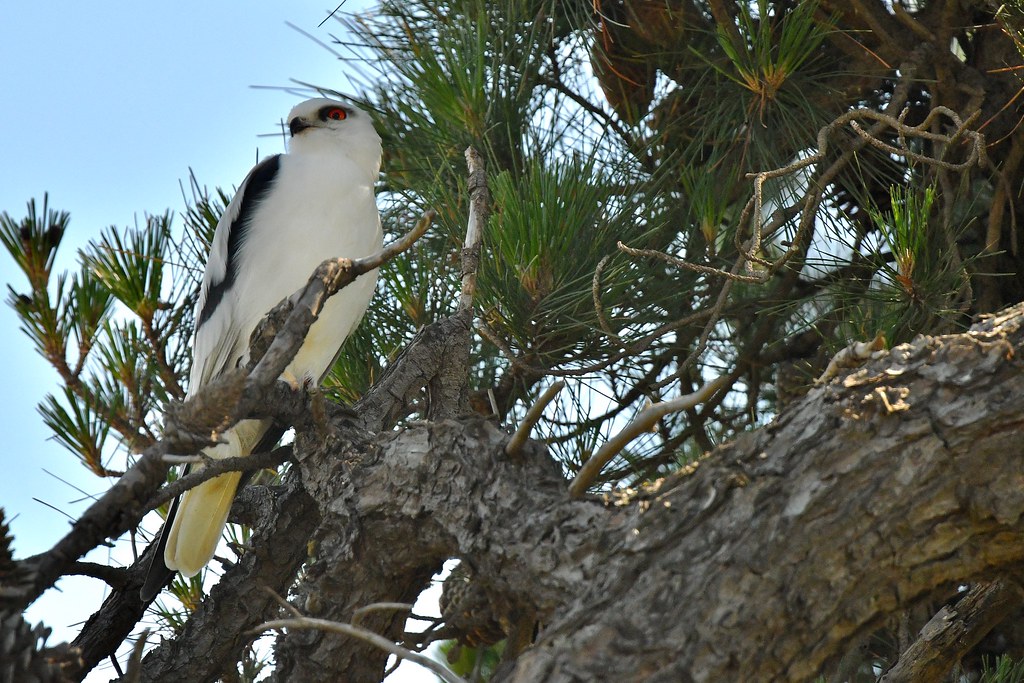