Years ago, the very first Raptor that I seriously made contact with in my beginnings of photographing birds was a pair of Brown Falcons.

The amazing birds were resident in the Backpaddock Area at Woodlands Historic Park out near the ruins of Cumberland Homestead. They were a very patient pair, and over the seasons I had quite a bit of time sitting in their territory while they carried on their falcon business.  And I managed several seasons with them when they nested, but the friendship changed to a very polite “Do Not Disturb”. The female taking umbrage to my intrusions more than once and on one occasion passing close enough by me to hear the wind on her feathers. They managed at least three young over the time I was actively with them.

I learned so much about the life of Brown Falcon from this pair.  Some things that have stuck with me.  They are as happy, and confident on the ground hunting as they are in the air.  Once I saw them do a dance routine display, not unlike Brolga, but perhaps without the elegance, as two big fat chooks jumping round each other is probably a more apt visual description.  They seem to have a territory completely mapped. A wing flap and a turn away is not some random movement, but rather quite a deliberate move to a location, which may not be in the direction of the first movement.  They are masters of the low level flight.  And if they can move behind bush or grasses, or perhaps along a creek or channel line, or roadway water runoff, they take that as first option.

Catching things is not about “Oh look, food” and going for it. Everything is planned to be a minimum of effort, often many minutes take place between spotting and finally attacking food. And I really suspect that both the approach and the exit are carefully planned.

They can hover in the air like Kestrels, although “Hover like a brick” is probably more accurate. Still in a good breeze, they can sit quite motionless, but mostly its a hard wingflapping to keep station.

It should come as no surprise to you, the reader, that I am somewhat attracted to these lovely birds as they were the birds of my childhood.  As kids traveling along the country roadways it was not uncommon to see a Brownie perched on a fence post every few miles (kilometers) or so.  We used to play a version of “Spotto”, which was the count of Brownies along the way.

EE and I have had a couple of seasons on the 29 Mile Road with a pair that seem to return regularly. I’ve featured them here before, as she is quite a large, dark bird with a marble chest.  He is a much smaller dude, and has a plain white chest. So much so that at a distance, its possible to mistake him for a Kestrel.

We had gone down to 29 both to see some Black-shouldered Kites that have settled in to nest, to test some Autofocus changes EE had made to the D3300, and for me to wrestle yet again with the 300mm PF on the D7100, or to convince myself that a D500 would infact be the best investment.

What I suppose we didn’t expect to find was the pair of Brown Falcons.

Sitting there, calm as you like, just visible in the grass.   We waited.

It was waiting for something in the roadway culvert.
Then. With barely a wing flap, it dropped.

Satisfied, and not in the least fussed by our presence on the roadway, it lifted up for the next perch.

The darker chest is the dress for the female in the area.

This is not a fly away, but a turn for positioning.  I anticipated it was going for the roadside post just near where I was standing.

The rest post was already chosen. Running low along the culvert she had already worked out the approach.

We both had to remark about how relaxed the bird was.

That look is not at me, (Well I don’t think so), as her male was coming over the roadway behind me.

They spent a little time in Brown Falcon talk, and flew back toward the ponds behind.  Too harsh a light for worthwhile images.

We moved on to the Kites.
But, the light fell behind a cloud and we headed for home.

So we headed back up the 29mile.

In the gloom we saw a Swamp Harrier working along a bund, and stopped to watch, the light was too far gone for much else.  And suddenly out of the roadside treeline a Brown Falcon burst with one clear intention, to cut off the Swampie. It was only a single pass and the falcon re-positioned itself in the tree.  We moved up the road.

The sun was firmly buried behind the cloud, but as is often typical at WTP, there would be a band of open sky just above the horizon and as Brown seemed settled we decided to wait to see if the rich setting sunlight would bathe the bird in rich gold.  And it would have been a good plan.

The tree was also claimed by a Willie Wagtail.  And inspite of me saying, “Shoo, Willie”,  it persisted until the Brown Falcon moved on.

We were just about to pack up again. When another shape slipped along the road in the glorious light and landed on the same tree.
An Australian Hobby.

Time just for one or two frames and the light was lost.

3 thoughts on “A Tale of Brown Falconery” 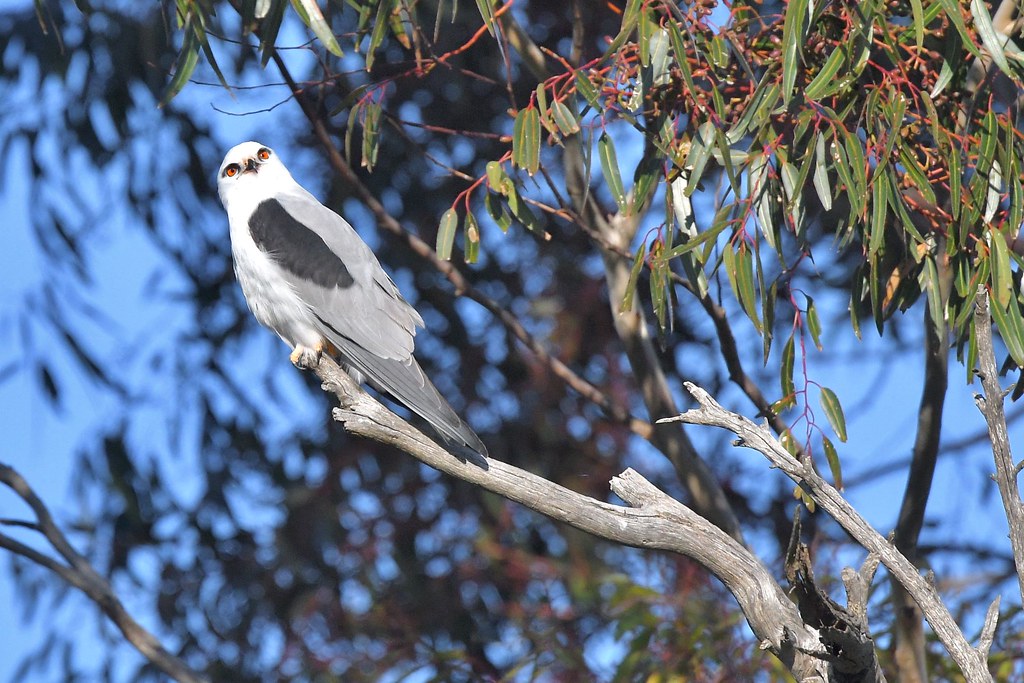 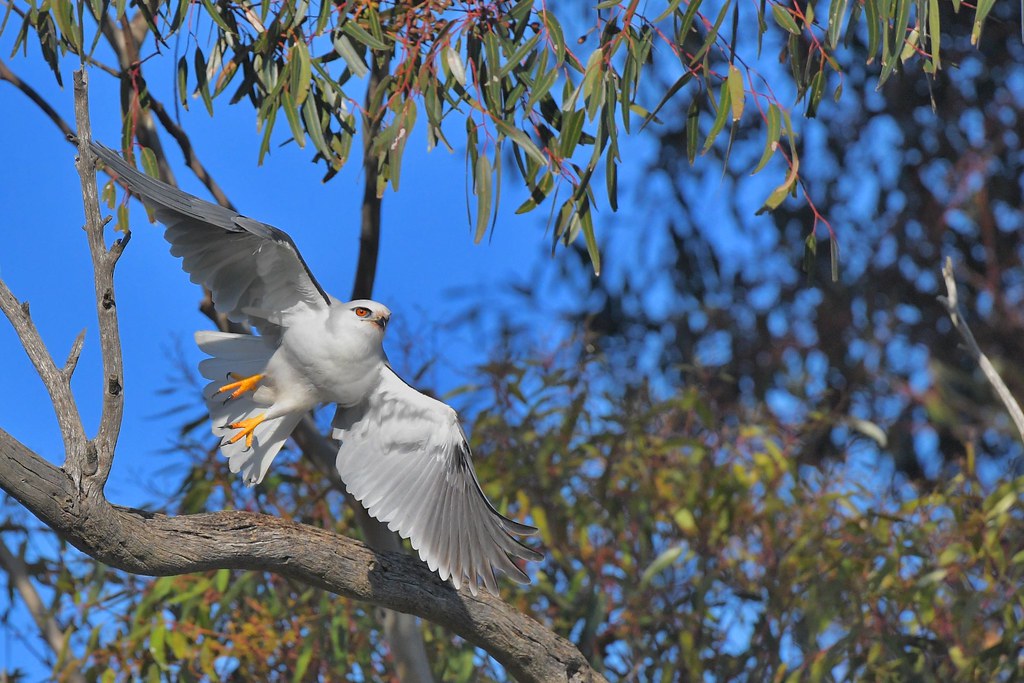 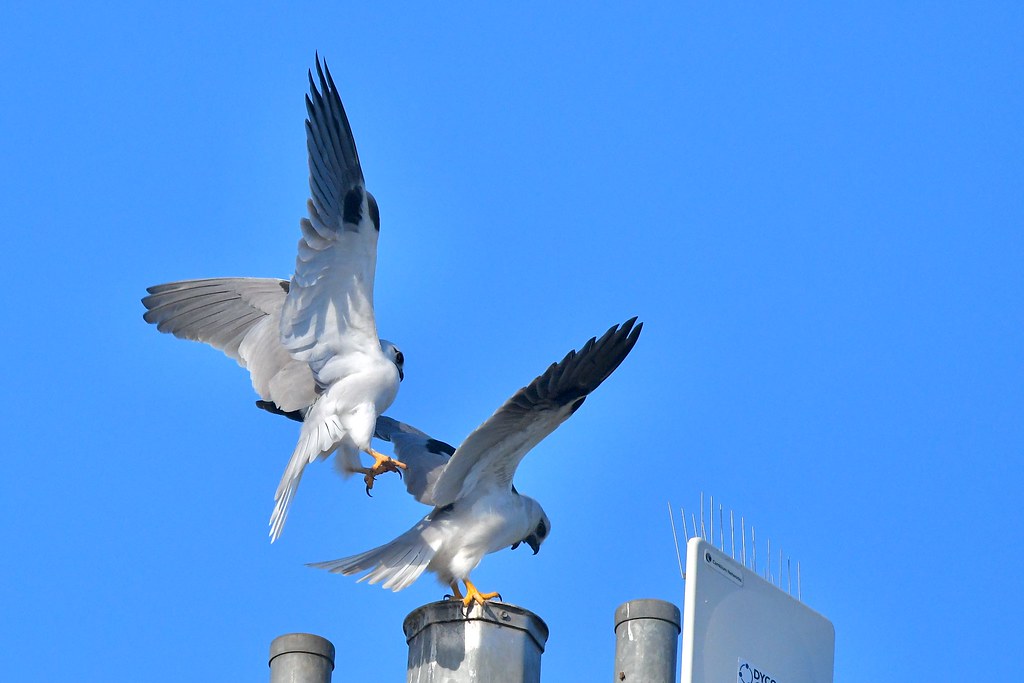