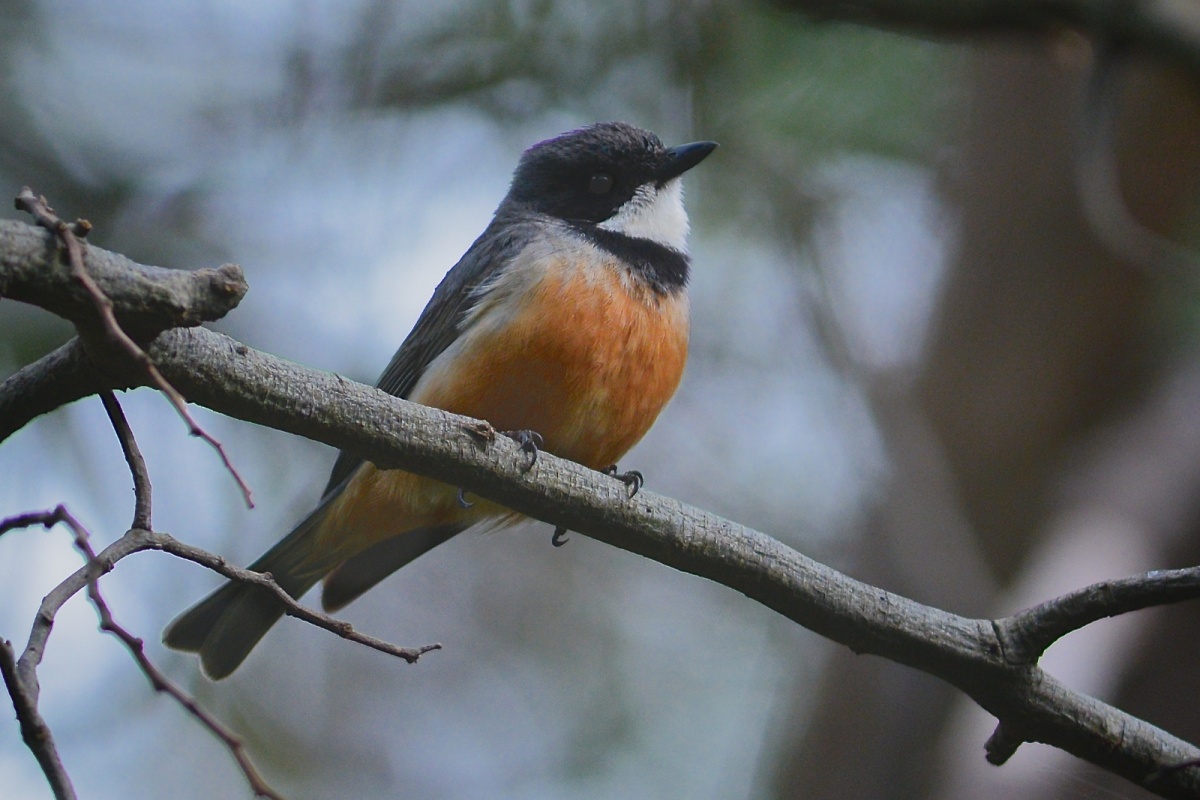 I know that all good things must come to an end, but when the weather goes from nice sunny, enjoyable, to cold, rain, windy, it’s a bit of a shock. So we woke to hear the rain rattling on the roof, the trees bent  over and the bushes behind our unit tap tap tapping on the wall.  Didn’t look good. Pull doona over head.  Nope that didn’t help.  Today we were off to Tower Hill Park, and the Beach, and a spot of looking about Port Fairy.

Stoically prepare lunch. Nice hot vegetable and barley soup into the pre-warmed Thermos. That proved to be one of my best moves of the day.  Pack in the Drizabone jacket. Second good move of the day.  Step out door. Not such a flash move. By the time we convoyed to Tower Hill, not much had changed, except now I was wearing said Drizabone.  And.  It was working, and it worked all day. Isn’t it great when a product does just what it says.  I would later stand on the beach and contemplate the bravery of early sailors in frail wooden ships that plied these impossible waters, and they used a product just like my Drizabone.

A walk around part of the lake gave  us a few birds and the highlight was probably a Rufous Whistler, but it took 18 people quite  bit of time to find it among the foliage.  We went on round to the Visitor Centre area, and walked around the Lava Flow Track.  Rain threatened and then retreated. Oh, good.   We arrived at a Bird Hide, and were getting ready to enter when it became quite urgent, as a huge squall began dumping water by the tankful. Just as well we were so close when it came down.

Back to the carpark for a warm morning tea and some nice cake provided by members, and a look at several Koalas that were in the area.  One took one look at us, the weather, and just tucked itself down even more.

Onwards to Belfast Beach, and a drive down Gorman’s Road.  Its a great place, and if you are in the area, make it part of the plan.  A inlet has created a small lagoon beyond the sandbar, and only at high tide does the water flow in. But its a great feeding area for all sorts of shore birds.  We parked the cars in a small carpark at the end of the road, and I was getting ready to go, put on Drizabone, put on warm gloves, add rainproof to camera, and … what’s this everyone is coming back.  “Oh, nothing to see?”, I enquired. “There is a large rain squall heading this way”, was the reply. And just as I opened the car door it struck. Pelted down.

So we sat in the car, and played, tic-tac-toe, I spy with my little eye something beginning with “R”, discussed the causes of world troubles, and in the end just stared out at the rain.  My Tai Chi master would have been happy.  “Ah glasshoppr, fold into your mind and see from within.”, so I wrapped the scarf closer and was absorbed by the universe.  Eventually reality set in and the rain stopped.

Down to the beach.  With a light rain, and a strong wind. Nope, make that a very very strong wind.  In between the tears being ripped out of my eyes, I could make out a range of shorebirds, and many Red-capped Plovers, several Ruddy Turnstones, and what I’m reliably informed was a Sanderling.  All hiding behind any cover they could find.   Its ok with birders as they stand back and look with long field-scopes, but us poor photographers have to get closer. So I set about slogging across the windswept sand and settled into a spot near where the waders had been actively feeding. After a few minutes they returned and I was rewarded with some reasonable closeups. Imagine if the weather had been fine.   With the rain, the salt borne on the wind, and the freezing wind, I lasted until the last man standing departed back to the cars.

Now to find lunch. Well the pre-prepared lunch spot at a sports ground in Killarney was at best windswept. So it was decided to go to Port Fairy and the rotunda on the quayside.  Third best move of the day. Shelter. Warm soup, great company and a little hint of sunshine.

From there the walk of about 4km around the coastline Griffiths Island, into the teeth of the same gale was on the agenda.  What amazing large waves and we walked past the burrows of Shearwaters. These amazing water birds with such flying skill have taken to living in burrows to have their young. Seems almost both out of character and somewhat unfair.   We could see their dark shapes riding the wild waves about 1 Km out.  An robust looking  Lighthouse stand at the far end of the island, and we found a White-bellied Sea-eagle nest in a huge pine tree on the way back.
Next on the list was a look for some Latham’s Snipes in a water hole in the township. This piece of land is used by over a hundred snipe, but is in eminent danger of being developed into townhouses. Once more I was reminded that Birds Don’t Vote in council elections.

From there the idea was to head back to our accommodation. So we took the opportunity for a bit a walk along the food strip in Port Fairy, and ended up in a lovely cafe for coffee and cake.  Bella Claire (see here https://www.facebook.com/BellaClaireCafePortFairy  set us out nicely with coffee and some amazing Lime Cheesecake. Yum. I also noted on the menu board, “Chicken Tandoori Pie”, must make a note of that I thought.   They also have a great little Photobook of the renovations and setting up, as well as events and ‘famous’ people who have been there.  Great way to make a use of photo books.   And… there is more.  Across the road is Cobbs Bakery. No prizes for guessing where I headed next.  Some fine rye bread and a great Scottish Fruit Loaf were worth the walk.

So back home in the rain, hoping that the weather might blow itself out over night.