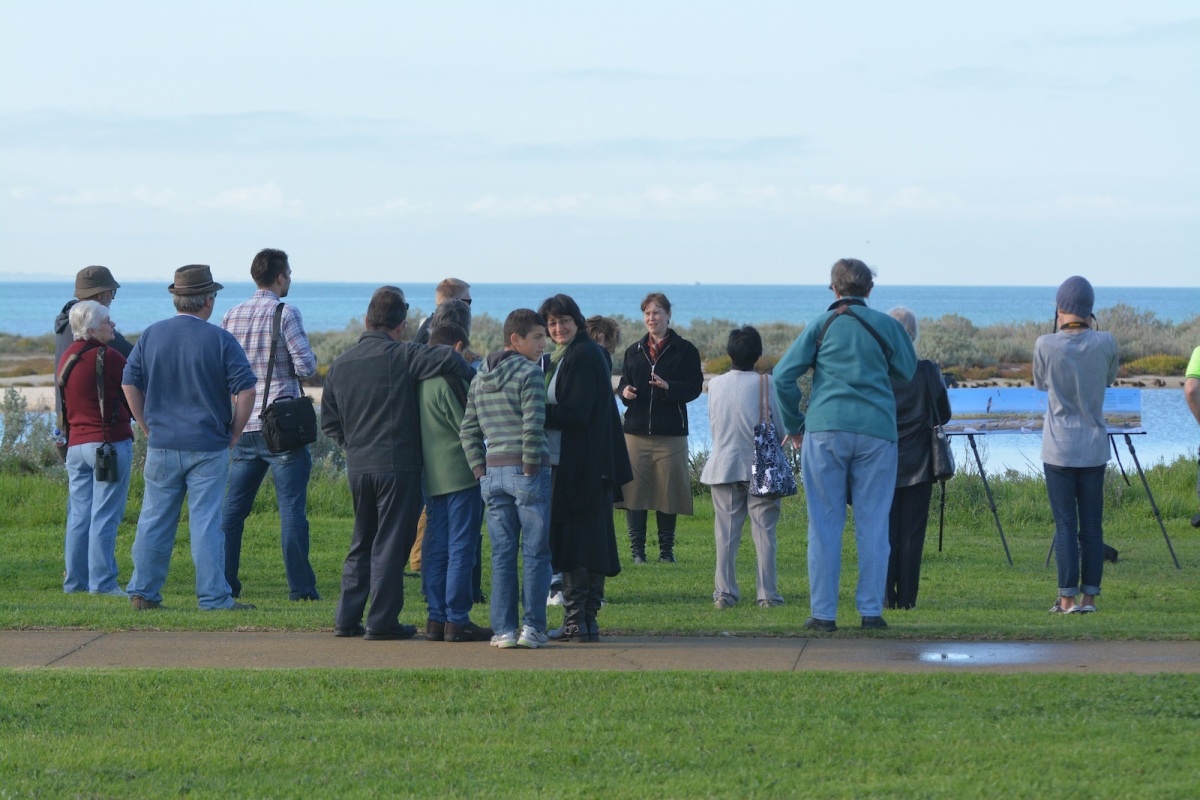 Birdlife Australia, in conjunction with bayside councils and environmental groups all across the country have been running an awareness programme titled  “Farewell to Shorebirds”

They have a web site, and videos and information about this year’s migration of these determined little flyers.   Farewell to Shorebirds.

The events culminate (I think that is the right word) with “World Migratory Bird Day 2014”  This is a United Nations sanctioned event and lots of events on the day bring an awareness of the efforts of those who are working with the birds and the supreme efforts of the birds themselves as they make their 14,000km trip to their breeding grounds in  Siberia.    Here is the link to the international organisation.

At a local level, the Hobsons Bay City  Council and Birdlife Australia set up a morning of activities and information  to celebrate the day.  As it turns out, The day the UN has set aside for World Migratory Bird Day, is the second Sunday in May.  Which as it turns out, coincides with our normal, “Mothers Day”.  The perfect opportunity for Spin Doctors and Word Smiths.

The event this year was held in a foreshore park in the Altona area, and as a ‘free’ bbq was promised, there seemed no reason not to abandon normal programmes and head on down.

The weather was sunny day, light breeze and relatively low tide. So the shoreline had lots of ducks, swans, pelicans, oystercatchers, terns, spoonbills, herons, egrets and more ducks.  But no waders!  Of course not, Silly.  They’ve left for the north.  So we stood around and pondered the flight of about 40gm to Siberia.   That is about 12 jellybeans.  And as the festivities, (and the bbq) got going we were able to view the variety of birds that call the mouth of the Laverton Creek home.

The local Mayor, Birdlife Aust dignitaries and the local ranger, gave some interesting stats on the birds, their habitats, their travels and the like.  The Spin Doctors were ahead on points as the connection to Mothers Day and the little tiny mothers, heading for the Siberian river flats was drawn to our attention.  Also not forgetting the ‘daddy’ birds who were also on the way, and without, if you’ll pardon the pun, their input, the process would be pretty much doomed to failure.  But I digress.

We were also alerted to the difficulty of the little travellers on their way and on the return because of the impact that human development has had on feeding areas.  (A point that I have to admit that cannot be too highly stressed.  Problem with a blog is you get personal reflections!)  I digress.

One of the issues addressed was the difficulty of dogs running free in Dogs off Leash areas. Just happened that is where we were standing.  And then like a stage managed concert, (Janet Jackson would have a been impressed), two large dogs,  decided that all this talk was annoying them, and started what is commonly termed a “Dog Fight”.  These were big brutes, one a German Shepherd the size of a small horse, ((Insert thought, wonder how much it costs to feed the thing for a year.) (Probably a small third world country food budget))  I digress.

So the whole event had to wait until the ‘Responsible Dog Owners’ managed to seperate the protagonists and things quietened down. Me,  whenever I see a dog salivating after a toe to toe, I know that its a dog under stress, and a dead set danger to others.  Still, to the credit of the speaking group, they regathered their collective thoughts and continued on.  However I think the point of danger to birds, dogs, humans and the like was already well made.  Well done demonstration team.  NOT.

More birds, more talk, more looking, and over to the bbq we strolled.  Well done team.

Thanks for all those involved in the organisation, their participation, and their friendliness and help to all who wanted to know just a little more about these wonderful travellers who call the shores of Hobson’s Bay home for part of their year.   We await with interest for their return, and the return of their new offspring.

A pretty good way to spend Mothers Day, or any day.

2 thoughts on “Farewell to Waders: Altona”