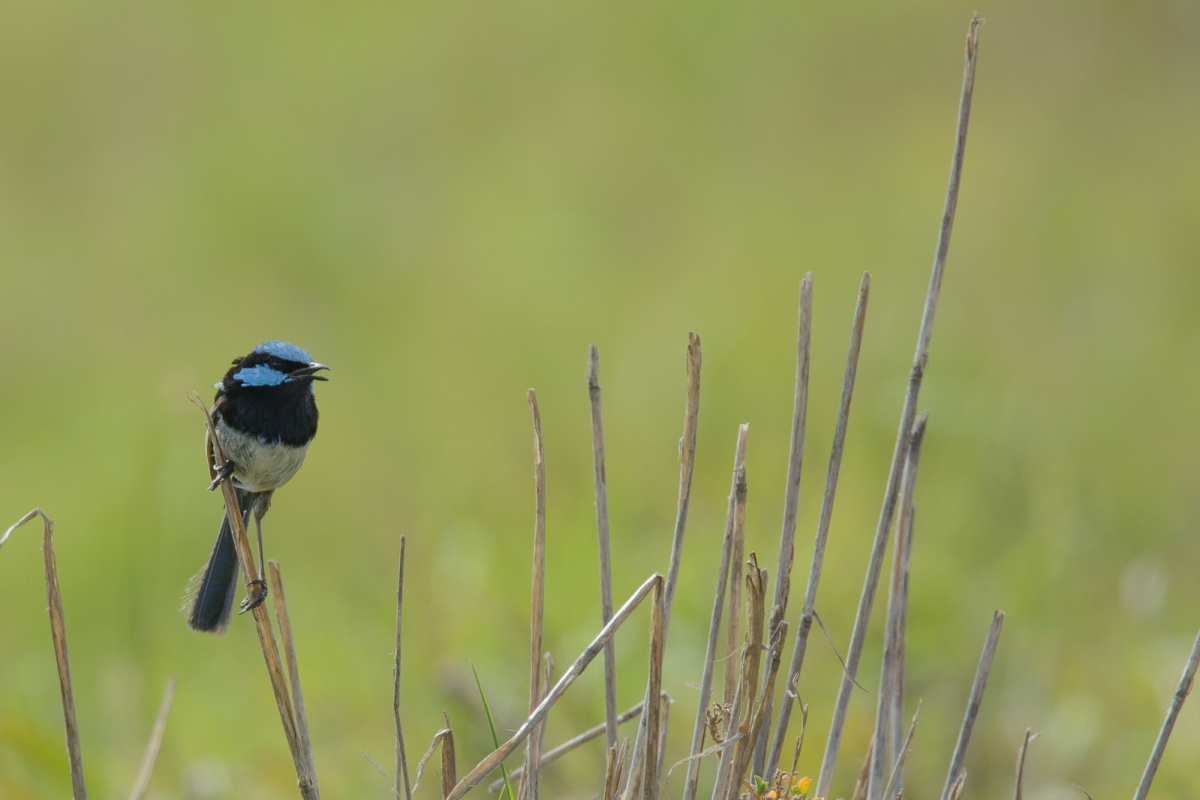 From our trip to the Office a week back.

We had walked down along the edge of the river to a spot where the river cuts back on itself forming a little backwater.
Good place to stop says, EE and well, I agreed.  Settled down for a cuppa in the sunshine.  It soon became apparent there was a family of Superb Fairywrens in the locality.   Their constant chattering and carrying food about, lead to the conclusion, “They have a nest, or young one’s very close to where we are sitting.”  The obvious spot was a large crop of grass and low shrubs they kept flying around.
So.
We moved.

With the humans out of the way it didn’t take them too long to get back to work.
I’ve been reading, co-incidently Rowley and Russel, Fairy-Wrens and Grasswrens.

Published in 1997, it details a lot of the field work of these two Australian Ornithologists over many years.  Intriguingly, I’ve been delighted to see a lot of what we have observed being detailed in the work.
One thing that becomes clear about the Superb Fairywren is the unusual family arrangements.
Once called “Mormon Wrens”, as it was assumed that one bright blue male was in charge of a harem of females in various lighter brown dress.

But it’s now known that there is only one ‘active’ pair, and the remainder of young in the family group are ‘Helper’ males of the first or second year.

On average the males outnumber females by around two to one.  So a female adult is in as the good Jane Austen so succinctly put it,

“It is a truth universally acknowledged, that a single man in possession of a good fortune must be in want of a wife.

However little known the feelings or views of such a man may be on his first entering a neighbourhood, this truth is so well fixed in the minds of the surrounding families, that he is considered as the rightful property of some one or other of their daughters.”

Change man to female wren, and it seems that an available female has little trouble in establishing a new family connection. One such female in Rowley’s book is reported as having attained a bond relationship in somewhat under two hours of leaving the home territory. 🙂

So what we saw were a male/female pair and two or three helper males hard at work.

What we weren’t counting on is what happened after about 20 mins of watching.

The chattering went up, the birds surrounded the bush and it was obvious something was amiss.  Suddenly at least two young virtually tailless fledglings burst clumsily out of the bush and took off, mostly running as they were not yet equipped to fly.
One took refuge alongside EE’s foot for a few minutes and then ran off eventually tumbling over the river bank edge and lodging (fortunately) in the bushes about two metres down.

The family continued its agitation at the bush. Conclusion being that some predator, – rat, snake ? had managed to get into the area.  Did they lose any of the young.  Hard to say. After about 10 minutes one of the helpers found the young one over the river edge and went to feed it.

Here is the drama as it unfolded.

The shot of the young wren is by EE (Dorothy M Jenkins- Friendsintheair, (c) 2016)

6 thoughts on “Wrens on Guard: Dangerous world for a young wren.”