Over the past couple of weeks, the Brolgas that are down in the WTP have been a bit more open and readily noticeable.  Either because of their walking along the roads along the bunds, or by flying in from seemingly nowhere.

At first I took to them as  photo challenge. Big bird, easy to spot, fairly photogenic.

However after a couple of weeks of working with them, I am enamoured.  These wonderful creatures with personalities all their own have walked, sung, and danced their way deep into my heart.

Not that its a two sided partnership.  They are very people averse and make their feelings on the subject well know, both vocally and by voting with their feet, or wings.

We had decided EE, Mr An Onymous and I to take advantage of the cool of the morning as being the best way to get the best light and to make a concerted effort to locate the Brogla.  Now like all birds, they don’t leave signs, or calling cards, so we left an hour or so after sunup and began our quest.

By mid-morning the score was photographers 0 Brolga 3. Then as we were going along the bund to Murtcaim(n) outflow, we saw the Helmutmobile on the other side of the pond, and on the road in front of him. A pair of Brolga. Apparently on a shopping expedition, or perhaps a philosophical stroll in the morning.  As Mr An has rightly pointed out, they walk fast on those big legs. And it was as much as I could do to follow along on the opposite bank, as they headed on down to the other end of the pond.

At one point we (both) came upon a mob of Black Swans in the pond, and they were startled either by me, or more likely on reflection, the Brolga. Much wing clattering, foot splashing and eventually they got airborne.
The Brogla stopped, turned their heads, and I thought “Oh, No, they’ll fly too!”  But instead they set up a constant calling and looking in the direction of the Swans, and I think I learned some Brolga speak. “Well, Look at those silly swans,  we sure scared them. ”

See Helmut’s shot of the Swans in complete disarray on the wing.

Another view is here. 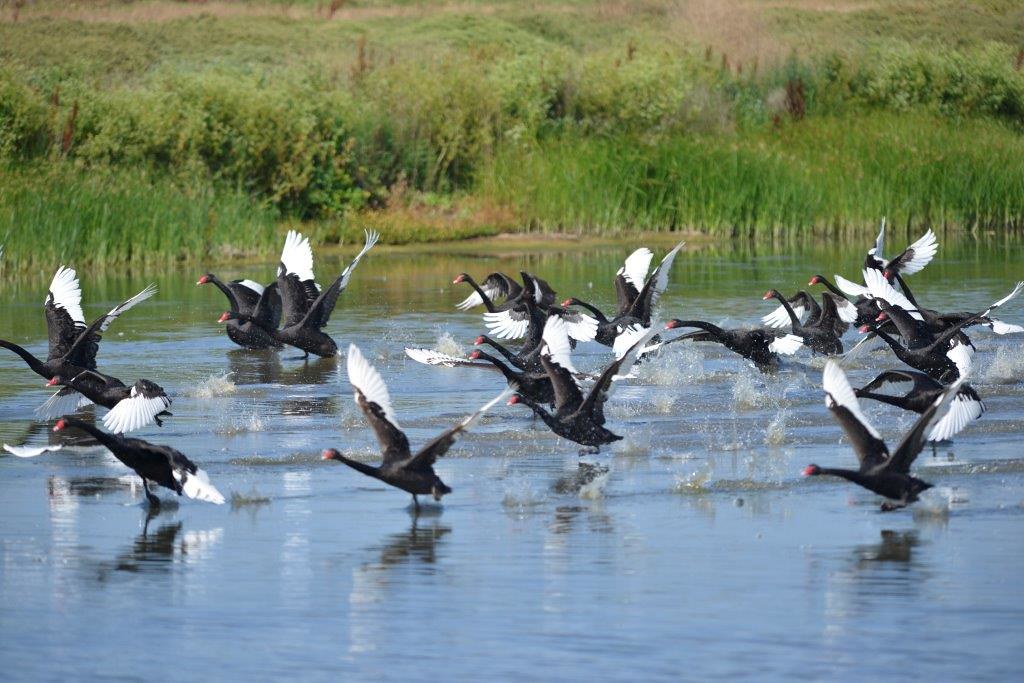 Satisfied that honour had been done, they turned and walked nonchalantly off down the road.

I moved to the end of the road, and the pool. There is a road running along there and I figured,  they will either turn left and be gone down the road or they might just as well turn right and walk pretty much right past me.  However, like all good stories, there was a third possibility that I hadn’t counted on.  They walked over the roadway, down the bank on the other side and disappeared into the grass.  Brolga 4.

We stopped at the Murtcain(m) outflow, but the tide was in and the best we could do was a nice cuppa and a chat.

When silently as stealth bombers, 3 grey shapes came over the paddock, dropped into the lagoon and immediately started walking. They were much to far out for anything really decent, Brolga 5.

However not to be outdone, I walked down to the end of the roadway and slipped along the roadside trying to get as close, and hoping they would feed across toward my position. Photographer 1.

What happened next was the highlight of my day, probably my month, and might even be my year. (I don’t aim high!).

One of the three, the smallest, stopped walking. Turned about and danced.  Now most have heard of the prowess of these birds as exceptional dancers.  Don’t believe it. They are much much more than exceptional.  To see a video is one thing. To see the elegance, lightness, the subtly of turn, and the wing movements is nothing else other than breathtaking.   Its ability to step, and twist and turn and jump in a co-ordinated manner can’t be explained and a few still shots, don’t even begin to touch the scope of the repertoire.  Photographer 2.
And it was doing it for itself. The other two took no part and took no notice.

I’ve concluded they do it because its fun. They enjoy it, and it’s an expression of being alive.  I know anthropomorphism is frowned upon. I don’t care, I think they have emotions and this one wanted to enjoy the moment.

The heat haze over the water affected most of the shots, but none the less, its only encouraged me to continue working with these birds and hopefully they will grace me with another performance.