Every year a welcome event is the return of Woodswallows to nest in the Sugar Gums area in the Woodlands Historic Park.

Mostly we get Dusky and sometimes the White-browed.  The Duskies come in huge numbers and by the end of breeding season they can really fill the sky.

They are not only great masters of flight, but can glide superbly as well. They are quite gregarious and seem to play interesting games that have some unspoken rules, but with a little bit of cleverness it is sometimes possible to work out the moves.

We were down the sugar gums looking for our old friends the Eastern Yellow Robins, from last year.  But with little if any success.  Perhaps that was a call over there. Perhaps, but no.

The day before we’d seen no Woodswallows so weren’t taking much notice until almost out of no where a family arrived.  Up to 60 or more birds, calling, flying, sailing through the air, loudly perching on trees and shrubs and hunting.  We really wondered if it was a flock that had just arrived and like returning home, wanted to check up that every tree and branch was in good repair for their adventures.

Anyway here some pictures of these gorgeous birds.

We’ve been extremely fortunate to locate a pair of Eastern Yellow Robins. Try as we might last season, they eluded us time after time.  But this year, we’ve been able to locate them as she prepares for nesting.

Because of the way we work, birds that get visited regularly get names.  This pair is no exception and Karen and Jimmy they’ve been dubbed. We normally pick couples from classic literature, or tv series or some such like, but this pair were named as we were watching an ad and the very proper and correct voice-over blob, said, “Let us introduce Karen and Jimmy”, and we said. “That’s the names we’ll use”  Now for completeness I can’t even remember what the ad as about and haven’t seen it since.

When you spend a goodly amount of hours in the bush in one location, sometimes it’s wonderful weather and no birds, or great birds and hopeless light, and sometimes nothing much at all.

As Karen gets ready to nest, she needs to bulk up for the 3 weeks or so on the nest, and Jimmy helps feed her.  So a quivering bird on a branch and shrill chitter is a good pointer to a feeding moment.   The process is so quick, that, blink, and you miss it. As he torpedoes in, she takes the food, and he sprints away.

So as I was sitting in the open, I saw Karen fly in, begin the wing fluttering and thought. This is my chance,  National Geo for sure.
Then she moved to the other side of the tree!

All I get is a tail poking out.
He sweeps in, deposits the grub, and is gone.  All on the other side of the tree.

So enjoy my misfortune.

The backlog is getting to me.  Can’t seem to find the few minutes to write even some halfway coherent stuff to make it worthwhile blogging.

But it would seem, in more ways than one, that Spring is upon us.  The early blossoming plum, almond and peach trees are a real giveaway. The slowly decaying winter wattles, and of course the lack of Flame Robins in the Backpaddock, or anywhere for that matter.

We’ve spent a few hours over the past few days, between the high winds, and the torrential downpours, trying to eek the last few great shots out of the dwindling numbers of Flame Robins in the Woodlands Park.

I know when spring is here, they sit on branches and deliver that lovely rolling rollicking song, and then within a week or so, its quiet.

One of the techniques we use to photograph birds is work out the territories, and so more easily predict (?),- is that the right word?- where they may be. As spring and obviously the nesting season fast approaches, its nice to have that all figured out before the female sets up house an then goes furtive and we hardly see either of them.
For the Red-caps its a scarce time, for the Scarlet Robins, its almost impossible to determine where in the large territory she might choose.

So we decided to have a look at a couple of pairs of Eastern Yellow Robins.  Not because I want to know where the nests are so I can set up and annoy her, quite the contrary.  If I know there is a nest in that area over there, then I’ll do my best to stay away from it and give her the privacy she needs.  So we generally sit back about 30-40 metres and watch what takes place.  If they hunt or perch out near where we are sitting we enjoy the moments. But we don’t chase them. It is after all said and done. Their living room.

Last season we had a bumper time with Jack and Jill, two really lovely Eastern Yellow Robins that got to the stage that when EE came by they would flutter down to see what she was up to.   Made for great photography.

We’ve tried to look for them in the old territory a few times since without success.  No idea where they’ve gone. Torquay?   But, today, it seemed like a reasonable morning to have a bit of a sit in the bush and just see.  And we did, and we didn’t see them at all.  Usually within the hour or so, we’d have spotted at least one of them working the logs and greenery. But not so.  So we spent an extra hour just in case they were late sleepers. But. No.

We like the sitting part, as it helps work out who and what else is in the area and can work out predator patterns, other forest users, where the Goshawks are going to nest, and how many Superb Fairy wrens can there be in one colony.

So armed with our knowledge we began the trip home.  We diverged from the track to have a quick look in another territory, as there was a pair there last season, but very furtive birds, I probably only got about 3 or 4 photos of them in the entire season.
Not a minute of the track, and she flew by laden with Spider Web.  Then another trip, then stopping by the tree we were standing near, she proceeded to gather more web and was gone. To return to strip bark from another tree, and go.
Now, we might be considered to be a bit on the slow side, but by now both of us had concluded. She’s nesting. And she was.  Then he came by with a big grub, and topped her up, and away she went again.   So at least one pair have taken the Spring time as here.

No doubt we’ll see more of this pair as thing progress.

I know, I know, I promised not to do politics, camera reviews and other controversial stuff, but this turned up today, and given my tirade sometime back.  Well, I can’t help meself

My posting here have taken a hit over the past few weeks,  not because of lack of getting out, but because of getting out. Just to many filing, sorting, deleting and tagging of images to keep up a steady repartee on WordPress.

EE and I were out looking for Eastern Yellow Robins the past week.  Not, I must say, one of our highpoint weeks, but you’ve got to put in the quiet days to get the magic days.  But while we were sitting looking a most interesting moment occurred on the old tree we were using as base.

A pair of Striated Pardalotes came on to the tree and began their usual “per. plink” chatter. But then the rate became quicker, and the volume increased, and plainly out in the open they began to display.  At first we thought it might be a young juvenile begging, with the wing fluttering and the lowering of the body, but both birds were indulging in doing it. And they followed one another back and forth along a couple of branches.

No contact was made by them, and they kept a small distance apart.  So I discounted a couple of males having a territorial dispute.  They seem to go into flying chest bumping as their opening gambit.

They kept it up on and off over the course of about two hours. Then completely disappeared (as Pardalotes are quite capable of doing).

At one point, they both seemed to be very interested in a small hole in the old tree trunk and popped in and out a number of times.

So perhaps its the beginning of a mating ritual?  I checked the venerable HANZAB, and it responded with the ‘insufficient data’ type comment, so we’re really none the wiser.
Still a couple of hours in the sunshine with some very active and attractive birds is a good day out. 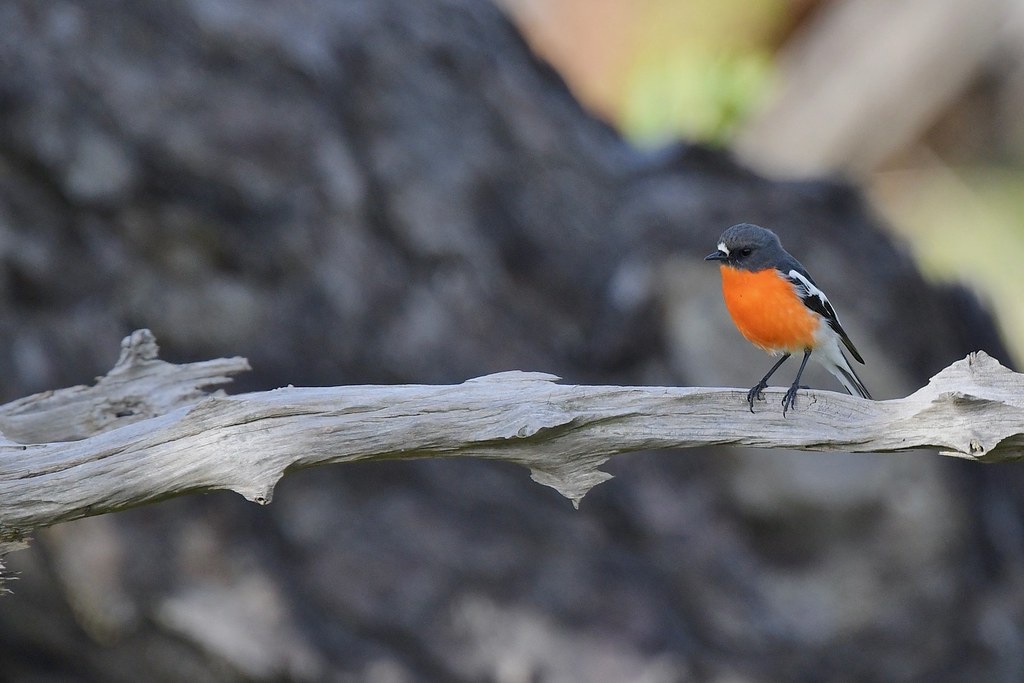 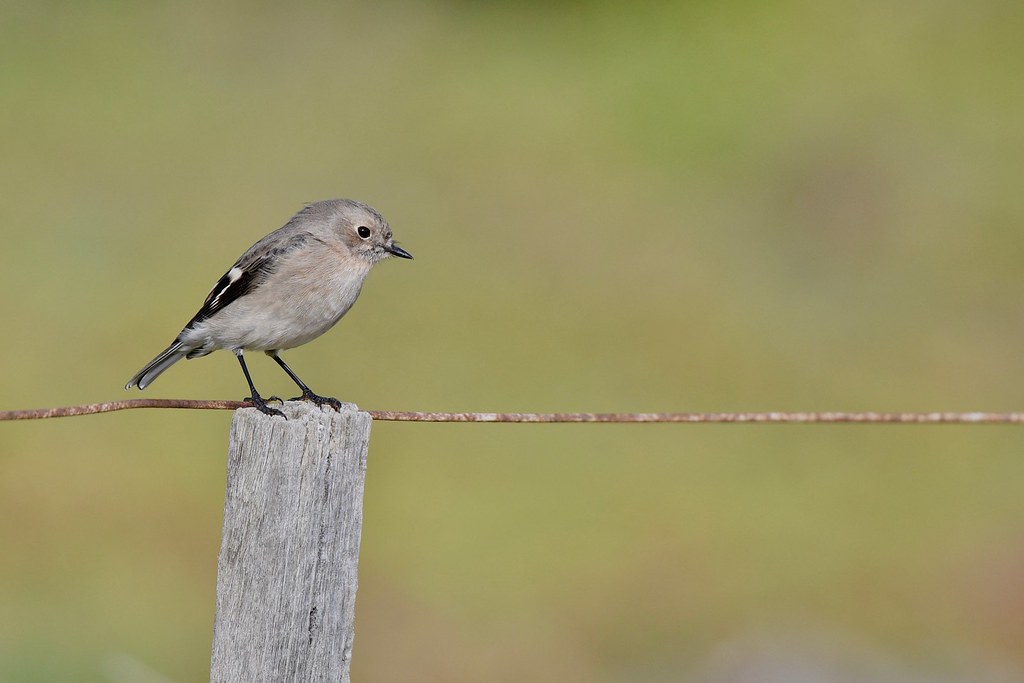 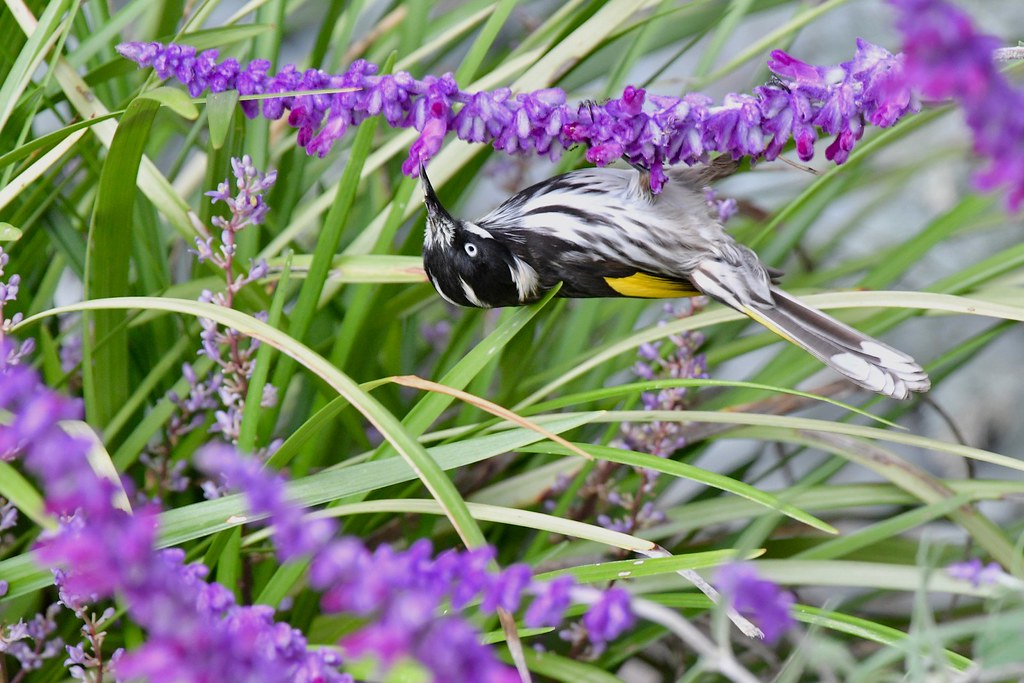