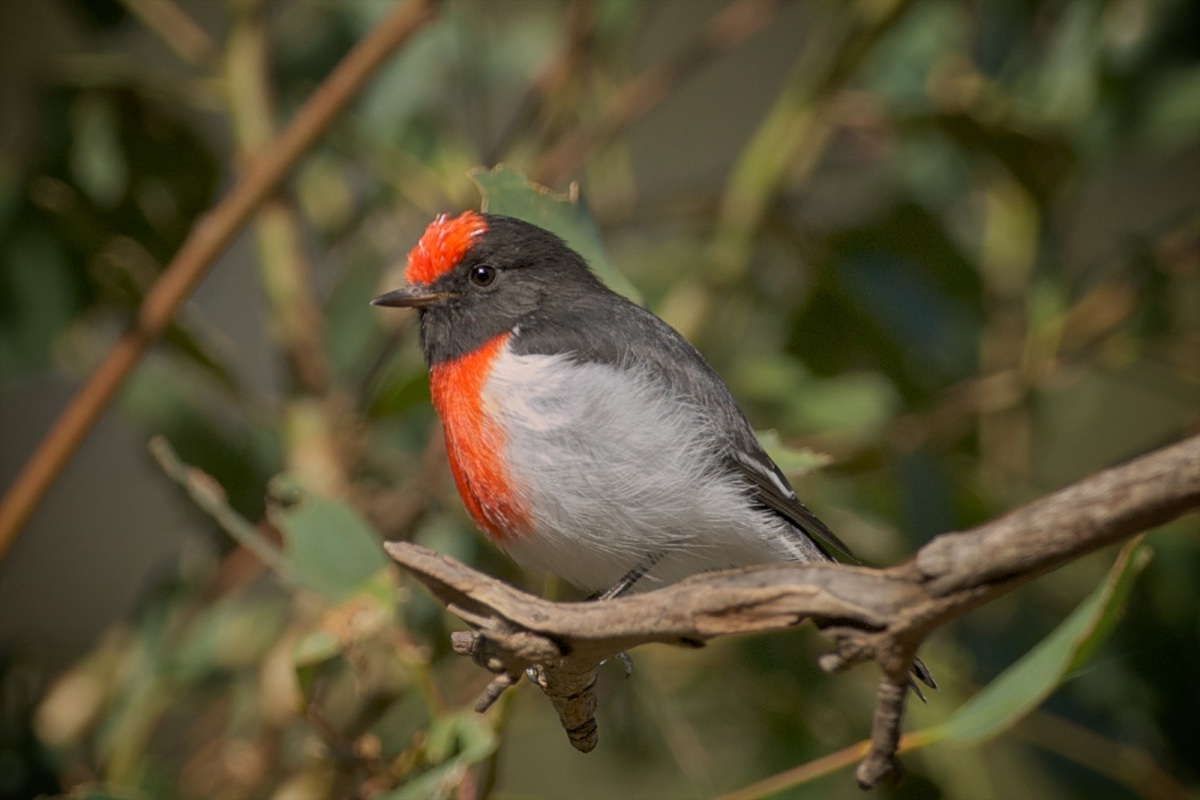 As pictorial photographers we keep a pretty close eye on the weather cycle, always hoping for one of those days that will provide the “Golden Hour”, brilliant light, cloudless day and little wind.  It can be in the morning, and then it is more a “Cool Hour” as the light takes on a lovely clear and mellow feel, sometimes attenuated by a whispy morning mist, or the gorgeous golds and oranges of late even light.  Always a treat and they don’t come that often.

The weather man had hinted on it being a good morning and we took the opportunity to set the alarm-clock a bit earlier and ventured out to the park.  The weather was to say the least Crisp. My birding mate, Ray’s car was in the carpark, so he must have been up even earlier.  Now the light was coming through the trees and it looked like a good session on the cards.

Along side the Access Road to the Backpaddock Fenced area there is a small clump of trees and open areas that the Redcaps have liked in the past, we found a male fairly quickly and his female, and their two juveniles and then the Scarlet Robin made an appearance in the tree tops announcing his arrival.  Also a Fan-tailed Cuckoo sauntered through.  It obviously didn’t get its passport stamped or its a bit behind the rest of the migration.

We went down to an area that is open and provide good viewing across what has in the past been several redcap territories. But all to no avail. While we sat in the warming sunshine and pondered what to do, a red flash darted past and landed in a nearby tree.  It was a male Red-capped Robin in his new winter suit.  (Well almost new, you can still see the remaining white feathers in his red cap.  Looks like a Sydney Swans supporter.

At first he was very nervous and spent a lot of time in the upper branches and some prickly wattle shrubbery, but later he seemed to relax, and out in the open on an old blackened Black Wattle he feasted- preened and sunned himself.  Ray popped by and we had a good discussion while Dorothy  kept an eye on the Robin.

I moved down to the area and he took off, and I followed up when he was happily ensconced in a small gum.  He is looking great, and I suspect that he has a female in the area as well, but we didn’t have a chance of spotting her.

The cold weather seems to have set in and perhaps the next week will see the first of the Flame Robin females and juveniles arriving for the winter.