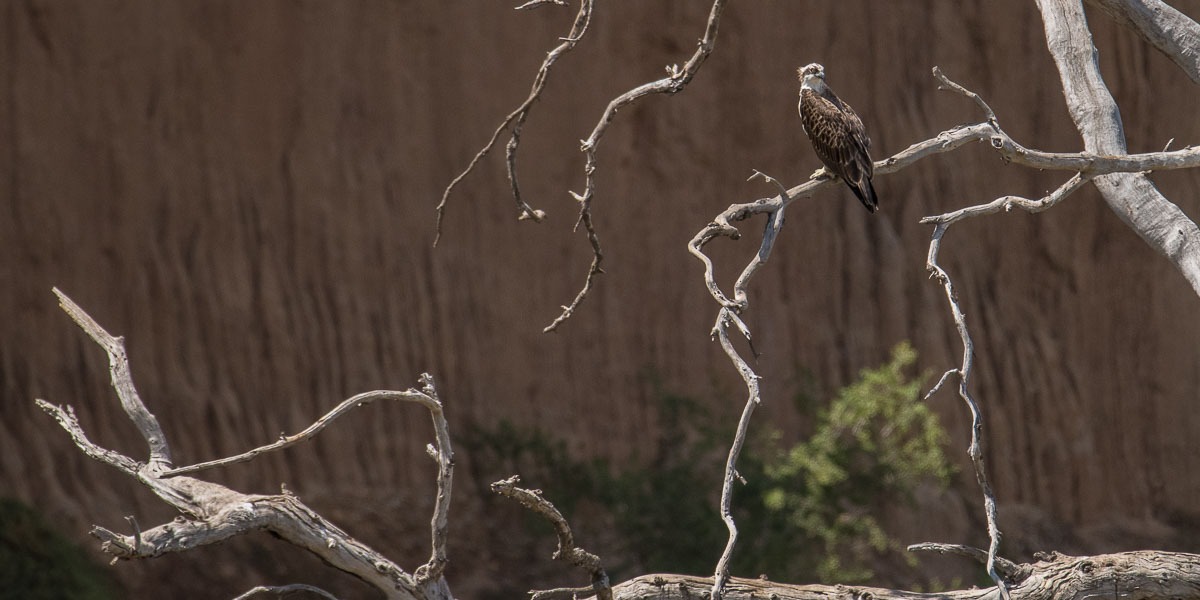 I received a note from my Flickr mate David Nice. “An Osprey has been seen feeding at K Road Cliffs”.

So I dropped plans of going to look for snipe the following morning and loaded up to go to K Road.

As soon as I got out of the car, I heard two distinct ‘Tcluck’ calls and figured she must be there somewhere.

But despite looking with the Binos from the carpark, I couldn’t get a spotting anywhere.  Was just about to think of walking down along the river, when the remainder of the morning shift turned up.  David, Gilbert and his friend all dragged out the big lenses and we began the search.
After about 15 minutes we were still none the wiser, but I spotted a Nankeen Night Heron leaving the water and taking to the tall gums alongside the cliffs.  And as they say, “A night-heron in the tree is better than an osprey you can’t find”, so we went to have a look. After a few average shots, we walked the little extra along the edge and down some steps, and someone spotted the osprey in the tree on the far bank.  Took a bit to work out among the various branches and twigs. But.

Yes, there she is. Fish in claw, and enjoying a freshly caught breakfast.

The rest of the story is pretty much boring. 3 hours just goes so fast, we sat, and stood alongside the river edge as she polished off the fish, polished up her feathers and took a little nap to let the meal go down.

We had been working most of the morning with rather average overcast light, and by late morning, the sun began to break through and her true colours became evident.

No doubt this is the same bird from previous seasons, and as the mullet are running up the river, it must be a fair assumption that this bird follows the shoals of fish. And of course it raises so many questions about where she is during the year, does she have a mate, or is she a ‘single girl’.

But what  pleasure to have such a lovely lady to work with. No doubt as the short season moves on we’ll have a few opportunities to work with her in action, and do some portrait sessions.
So be ready for a stream of blogs featuring the fine lady Eloise.

10 thoughts on “High Day in Elegance”